Violet and chip just got a new dog house.

Posted from WordPress for Android

Chillin’ at the dog park 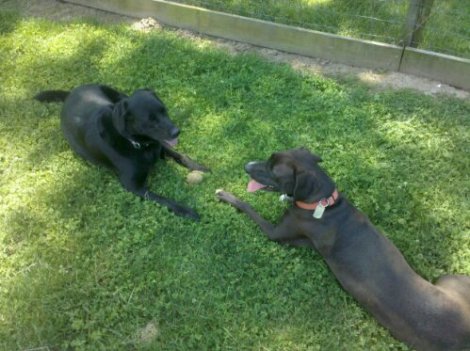 We decided to come romp at the dog park again. It tends to be more rlaxing than walking around on the leash and the kids get to make some friends. We also drove through Shelby Park for the first time since the flood. The golf course is open.
I have also been messing around with some settings in facebook so I am interested to see if this automatically posts in notes.
It has been some time since I have posted on this blog. I guess I haven’t been feeling like sharing much. We’ll see if that changes. I have been focusing my energies in other places, specifically work and baseball. We have been doing some pretty cool things, but wp has not been my outlet. I think I have been putting a lot of photos from recent trips and what not to picasa.
Part of this is figuring out all of the things I can do with this phone.
Any way, I just felt saying all that.

Violet and Chip are getting a good work out in for the day.

Violet and Chip hanging out being little sweethearts.

Yesterday Missie and I took Violet for a walk out to Edwin Warner Park. We hiked the Harpeth Woods Trail and found a geocache entitled bats (GCN4VR).

Got this photo from Farsang

Thanks to Farsang for sending us this photo.  It was a year ago yesterday that we stayed in this shelter with him.  Good times.

The story of Violet

Once upon a time, there was a spectacular black lab named Bear. Bear was a wonderful dog…full-bred and professionally trained for shows. However, his original owner could not keep him because he grew to be skittish around people and preferred a more isolated life. At the same time, Reuben was looking for a mature, well trained animal to own and so found Bear and adopted him.

A few years later, Bear was diagnosed with a brain tumor. There was nothing that could be done. And so, sadly, Bear was put to sleep and buried with tears in the backyard.

The next Spring, in the place where Bear had been buried a whole mess of Violets sprouted up. And the next year, and the next year. Finally, when Reuben was ready,

he turned to me while gardening in the yard, and said that he’d like to adopt another dog…a female black lab… and name her Violet. And so we did, 2 hours later….(it turned out he knew someone giving away puppies…)

Anyway, that is the unsolicited story of Violet’s namesake….

<
Here are some of the photos of Violet. This is the first time I have tried to put a slide show directly in the blog, let me know how it is working.

Well, It looks to me like the slideshow is working fine. It even seems to adjust for the changes I am making in the album on picasa. If you want to see the albums for a bit easier viewing, then click on the slide show here and it will take you to our public album on Picasa.

I know we are finished with the AT, but I think we will be reflecting on it a bit now that we have technology handy, so keep checking up on us. Besides, you never know what our next adventure may be.

Welcome to my blog, thanks for stopping by to check it out. This is a place for me to share some things that I think are cool which covers a wide variety of topics. Some of it will be personal and there will be some techy stuff too. Basically, whatever I want!

Play me in chess!

We're here for all of your tarping needs.

Not Technically a Hobo

Living a transient life - in alignment.

Stories and lessons from my hiking, running, and bikepacking singletrack adventures and the roads in between.

The Adventures of Dormouse and Dirt Stew

Savouring life intensely every hundredth of a second by capturing scenes from across Cumbria - the Lake District National Park. A pictorial guide to the lakes by a dilettante photographer.

The travel adventures of a teacher couple...

Fly fishing Nebraska is about more than just the fish...

To Turkey & back; adventures in life, romance, heartbreak & seeing the funny

digital media and all things related...

A Special Education Teacher's Views on...

A Drive to Learn

Explorations in education and technology.

Join Dave Delaney as he blogs about social media, marketing, technology trends, and his digital life in Nashville, TN.

Only Need an API key

Crap that makes me angry

a blog for my life

We Are Meant To Live